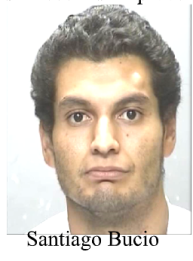 On Tuesday, January 28, 2020, at about 9:10pm, Coalinga Police Officers responded to the carport area of an apartment building located in the 500 block of Washington Street on a report of a person sleeping in the backseat of a parked truck.

Officer contacted Bucio and took him into custody without incident. During this investigation, officers were able to link Bucio to the prior arson damage done to the victim’s truck, which is estimated at over $1500.00 in damages.

Bucio was transported to the Fresno County Main Jail where he was booked into custody for trespassing and arson.

Anyone with information related to this investigation is asked to contact the Coalinga Police Department’s Public Safety Dispatch Center at (559) 935-1525.

“All suspects are presumed innocent until proven guilty in a court of law.”