Many agencies across the United States and even internationally, have made the use of Narcan a front runner in their emergency response kits to help those falling due to opiate overdose. Its use is mandated in many police agencies although it has not become common. In Coalinga, City Council member Tonya Stolz has brought the issue to the table for consideration as an item to be stocked for the Coalinga Police Department’s use.

It’s an interesting idea, and may be an important change in police protocol when dealing with drug overdose subjects. There are many aspects of this program that should be considered, but the bottom line is: How much is a life worth?  Naturally, most people are reluctant to give a dollar amount.

NARCAN is the commercial name of a drug (Naloxone) which is used to can be a useful tool in saving the life of someone who has overdosed on an opiate based drug.

The drug was patented in 1961 but was not approved for use until ten years of testing had passed. Even then, it was not widely used. It has, however, been labeled by the World Health Organization as an “essential” component of typical emergency kits used by health workers. 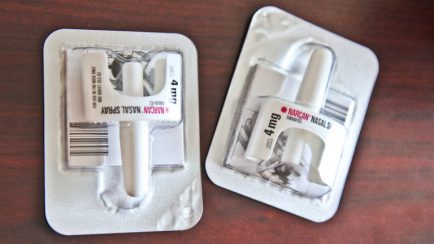 Narcan is a highly effective drug which can be administered in several ways: intravenous, intramuscular, subcutaneous, and intranasal. The quickest and most often used way to deliver Narcan is through a nasal spray. The drug is often carried by those people who are mostly likely to come into contact with a person who is in respiratory distress and failure due to opiate use. This would include first responders, family and friends of those using or abusing opiates, police and outreach workers.

Narcan is available without a prescription in all states except Hawaii. The cost varies widely internationally, with some single doses priced at only 50c (WHO) while in the US, it may cost as much as $40 (generic cost) for a single dose.

Opiates are both legal and illegal, depending on the type used. Heroin and fentanyl are examples of illegal opiates. Other synthetic opiates may be prescribed by a physician to help an individual deal with severe pain. These would include oxycodone (OxyContin®), hydrocodone (Vicodin®), codeine, morphine, and others.

The Center for Disease Control has announced that the United States is in the midst of an opioid crisis due to misuse and abuse of these drugs.

In the year 2017, there were 70,237 drug overdose deaths in the United States. 47,600 of those deaths were directly caused by overdoses. Although data has not been completely compiled or analyzed for the last two years, preliminary data shows an increase in the number of deaths related to opioid misuse.

Opiates affect the part of the brain that regulates breathing. High doses of those drugs  can cause death due to lack of oxygen. There are three telltale symptoms that can be recognized when assessing an individual’s status: pinpoint pupils, unconsciousness, and respiratory depression.

When alcohol is added to drugs, whether recreational or prescription, the risk of death is even higher.

When considering making Narcan part of a police officer’s job, there are other factors to consider other than the cost of the drug itself. All officers who will be involved in the use of the drug must undergo training to learn how to be effective. A basic overview of drug abuse and addiction.

Training will teach them how to recognize the symptoms of overdose, when and how to administer Narcan, what dosage of naloxone is necessary, how to work with people coming out of an overdose and what to do once the subject is stabilized (how to follow up with emergency medical services, addiction referral programs, etc). This may seem simple enough, but how the training is achieved will have a direct effect on funding for the project. Those aspects are some of the details needed to be scrutinized when deciding on the best course of action for communities interested in making Narcan part of their protocol.

Another thinking point is: Narcan may rescue a person from death at one point, but its effectiveness lasts less than an hour. That patient will need help in recovering from overdose beyond the initial life-saving dose of Narcan.

It also does not address the bigger issue of addiction or abuse. Individuals who find themselves in need of the miracle drug, Narcan, also need help in realizing that the bigger problem is much more complex and difficult to resolve.

What programs or assistance does Coalinga offer those who are addressing the problem of addiction? What help is available for the accidental abuser; the individual who finds them self in the clutches of opioid addiction following use from a prescription. Many people find themselves  unintentionally addicted to opioid use. How can Coalinga help them? How WILL they help them? How can we as a community help them?

Several years ago I found myself lying in a hospital bed with some rather severe health issues. The doctor was giving me directions for a lot of life modifying behaviors. Among those he outlined was giving up my low level but consistent use of a prescribed opiate for acute and chronic pain.

I closed my eyes in stark panic. Quit taking my prescription? I wasn’t abusing it. I wasn’t even taking the prescribed amount. I made sure to take less than prescribed. And now they wanted me to quit altogether? How would I be able to make it through the day? The pain was too much.

But with help from family members and friends, I completely quit using all pain medication with exceptions of Tylenol or sometimes an Advil. I found that as I became more active, I was stronger, and able to manage my pain without masking it.

In the long run, I found that the pain medications were wearing me down and making me apathetic about life in general. So the scale of life became more in balance as I returned to a cognizant, active person.

Yes. I live in daily pain. But I am living. And loving. And caring. Accidental addiction is no laughing matter, and it can creep up on the most unsuspecting person. We can all be there for that person. We can all reach out to support those same people who might just be the ones needing Narcan in the first place.

It is an epidemic. And as a culture and a community, we need to address it.